Governor Road is the original entrance to Graeme Park and the Penrose-Strawbridge House. It currently exists as a gravel road extending only a short distance from Keith Valley Road southeast to Gate 9 of the former Willow Grove Naval Air Station, but its history dates back almost 300 years.

Governor Road ran north from the Horsham Meeting then turned left towards Graeme Park. The road was extended north from this bend towards Doylestown and yhis road became public in 1830. The village of Hallowell grew up around this crossroads. Justinian Hallowell established the Hallowell Hotel here in 1880. 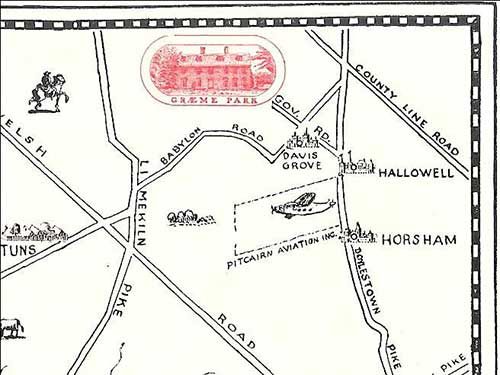 "...That he had made considerable advancement in the erecting of a building at Horsham in the County of Philadelphia, in order to carry on the manufacture of grain, etc. and that it is necessary for some convenient roads and highways through the woods, to and from the said settlement, be laid out by order of this board. "41 p2.3

The road went north from the present Willow Grove and likely followed what is now Easton Rd to the Horsham Quaker Meetinghouse at Meetinghouse Road and Easton Rd.

"Thomas Iredelle lived about half a mile north of the meetinghouse, and beside the present (

We recently discovered - as part of our Document Preservation Project - a map titled "Roads to Graeme Park" by Marc? Reynolds Brothers, Doylestown, PA. We date this between 1924 when Harold Pitcairn began Pitcairn Field (which is also shown on the map) and the mid 1940s when the Willow Grove Naval Air Station was created in this location.

Davis Grove Road was extended in 1737 to reach Governor Road and village of Davis Grove grew around this intersection (also reported to be the intersection of Governor and Privet Rds but we do not have a map that shows exactly which). The village featured the Golden Ball Tavern. References to this and an earlier tavern indicate that acquaintances of Governor Keith may have stayed at the tavern but its not really known whether the village preceded the extension of Davis Grove Road or not. The village was demolished when the WGNAS was created in the 1940s.118

HPHA's architectural historian, Herb Levy, traced the original route north from the Quaker Meetinghouse past the former Iredell property. The Governor's Road took a turn to the northwest off the current Easton Road and crossed what is now the Willow Grove Naval Air Station, probably following what is now the base's Skytrain Drive. Skytrain Drive goes northwest across part of the air base but ends at the tarmac. Extending Skytrain across the tarmac shows that it would meet up with the current Governor's Road at the base's Gate 9.

At Gate 9, the current Governor's Road picks up and extends to Keith Valley Road. The road originally turned down what is now the driveway to the Penrose Strawbridge House and ended directly in front of what was originally the 1721cabin that was transformed by the Penroses into the existing farmhouse. So Keith's "new building" referred to in his request to build Governor's Road may have been this cabin and not the mansion we now call the Keith House.

At the entrance to the Penrose Strawbridge farm, there are several interesting features.

The first is a three walled ruin, which is believed to be the remains of a barn dating to 1735-37. This barn appears on a drawing from 1737 found with documents requesting that Governor Road be expanded from Horsham to a quarry in Eureka. We believe the quarry mentioned by Keith was the quarry in the village of Eureka (now Chalfont) on Lower State Road in Bucks County, PA several miles north of Graeme Park.

The second feature is a stone marker carved with “18 M to P’, which probably indicates 18 miles to Philadelphia from that point on Governor Rd. It may be an early mail delivery marker. This is shown at the top of this page.

We have found some evidence that there may have been a small inn or tavern on Governor Road just outside what was the main gate to Graeme Park. This evidence dates to the revolutionary period and may have been part of the encampments at Graeme Park in 1777. 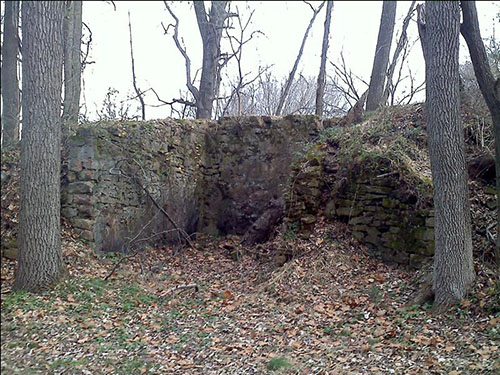