William Penrose is the second generation of Penroses to own and farm Graeme Park.

William Penrose, the 3rd child and 2nd son of Samuel and Sarah Penrose, was 19 when he moved with his parents from Richland Township to Graeme Park in 1801. His older brother, Abel, remained in Richland. His older sister, Gainor, would marry Richard Jarrett (son of Jonathan and Hannah (Mather) Jarrett) of Horsham. He married in 1810 at age 28 to Hannah Jarrett (daughter of William and Ann (Lukens) Jarrett), also of Horsham. William and Hannah moved into a new home - a large 3 story addition that had been added to an existing c1721 cabin - that had been built just south of the Keith Mansion on the grounds of Graeme Park. This building, which has a date plate showing "W & H P 1810" on the chimney on the western facade, is what we now refer to as the 1810 section of the Penrose Strawbridge House. 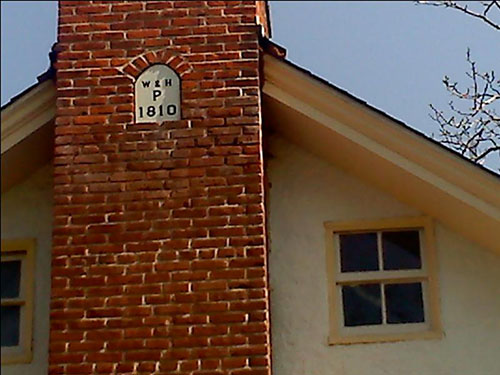 William's father Samuel remained at Graeme Park and father and son continued to run the farm until 1819 when Samuel purchased another farm in nearby Warrington, PA. On Jan 2, 1820 he sold the 204 acre Graeme Park to his son for $14,000 (see Graeme Park Timeline). William managed Graeme Park with "Steady habits, honored and respected by all who knew him." (16 p907). Together with his wife, Hannah, they made Graeme Park "a rich and productive land, one of the most valuable farms in Eastern Pennsylvania." 15

Hannah Jarrett Penrose was fairly well educated and had completed her schooling at the Westtown School, a Quaker boarding school in West Chester, PA that had been founded in 1799 and is today, per its website :"the oldest continuously operating coeducational boarding school in the nation". Westtown had been "planned (in consultation with such local luminaries as Benjamin Franklin and John Dickinson) by a committee appointed by the Yearly Meeting in 1794 .. and based on Owen Biddle’s 1790 pamphlet A Plan For A School." 20 Westtown records show that Hannah Jarrett was student #385 when she enrolled in January 1805 at age 21 and stayed there through October of the same year. Her age and the length of her enrollment there was not unusual for the time. Often the older girls were furthering their education in preparation to teach. 29

"The curriculum at that time was intended to be useful, and it included reading, spelling, penmanship, grammar, and arithmetic along with sewing for girls and surveying for boys, the latter two being the only difference in offerings to the respective genders. In keeping with the Quakers' desire to have an understanding of the natural world, both boys and girls studied geography and astronomy. Map making was part of geography class because drawing was a useful skill to hone. Creative art and reading fiction were not allowed at the time." 29

Westtown's archivist, Mary Brooks, reports that Westtown has two needlework samplers in its collection which Alice Jarrett - Hannah's sister - did while enrolled at Westtown from 1809-10.

"... the prettiest woman to come to the Horsham Meeting. She had great self-control and in her quiet, gentle way usually attained her wishes and always enjoyed the full confidence of her sons as well as her daughters."

Temperance and other moral reforms were big issues in the mid 1800s, generally 20 and among Quakers (21. Although Quakers do not forbid the use of alcohol 22, Hannah was deeply interested in this movement so William promised to have no alcohol in the house.

The Penrose's success, of course, did not come easy in the early days of the 19th century. Jennie Davis describes the struggle.:

"At first he had much to discourage him. Although he worked very hard, he found he was not making much headway. He became so discouraged that he about decided to give the place up"

By 1824, it seems William was unable to make the farm work and turned to his father-in-law, William Jarrett, for a loan. On July 4, 1824, William and Hannah transferred the deed for Graeme Park to her father for the sum of $15,338.75. William Penrose continued to pay the taxes on the property but had not repaid the loan by 1827 when William Jarrett fell from his horse and died on his way to Meeting (the horse continued to the Meeting shed without him).

"In 1827 William Jarrett met with a fatal accident. One morning, in his seventy-ninth year, he was out riding. His horse, scared by the sight of a snake sunning itself on the bank of the pond, reared, throwing him upon the stone dam. He died instantly. 38 - see also 1300 Easton Road - Horsham Homestead)"

The deed for Graeme Park, following Jarrett's death, was now bequeathed to Hannah Jarrett Penrose and 4 of her 5 sisters. (Hannah's sister Anne was bequeathed the main part of the Jarrett farm.) On April 10, 1828, Hannah paid her sisters $16,500 to transfer the deed for Graeme Park to her name. The original transfer was recorded on 2/19/1827 and the transfer back to Hannah Penrose is dated 4/16/1832 ( Graeme Park Timeline). William and Hannah also acquired 15 additional acres between purchasing the farm from Samuel and mortgaging it to Jarrett since these deeds are for 219 acres. The record of these purchases was not found.

Between 1832 and 1865 when Graeme Park was sold to son Abel, the Penroses acquired 10 more acres to bring the size of the farm in 1865 to 229 acres. There is no record of when this additional acreage was acquired, but things seem to have improved for the Penroses because in 1850 their Horsham real estate holdings were accessed at $27,500.

William and Hannah raised six children at Graeme Park; one son, William, died in infancy in 1822.

Anne J Penrose, William and Hannah's first child, married Abraham Iredell, son of John and Ann Iredell on April 4, 1833 in a ceremony at the Horsham Meeting 10. They had 4 children: Tacy and William - who both died in infancy - John, and Hannah. Abraham Iredell died sometime prior to December 1841. 2 p26

After her husband's death, Ann and her 2 surviving children returned to live with her father, William, at Graeme Park. The 1850 census shows the following living here at that time: William Penrose, farmer, age 68; his son Abel, farmer, 33; daughter Hannah, 30; daughter Ann Iredell, 38, Ann's children John Iredell, 13, and Hannah Ann Iredell, 10 Also shown on the 1850 census was laborer Samuel Montieth and Sarahann Paxson, 19 (possibly a boarder) 11 Anne's brother Samuel was William and Hannah's second child. He died in a fall from a log wagon on February 24, 1848 when he was 34 years old. He had not married. 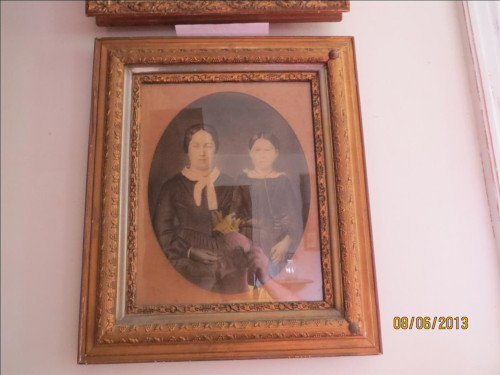 Jarrett Penrose was the third child of this generation,and married Tacy Ann Kirk on January 20, 1842 at her mother's home in Abington, PA. Tacy's great-grandfather, John Kirk, had been the stone mason who built the Keith House 120 years earlier. Her maternal grandfather was the clock maker Seneca Lukens and her uncle was Isaiah Lukens who made the clocks for Independence Hall and Loller Academy. Elizabeth Graeme Fergusson had lived in Seneca Lukens' home after leaving Graeme Park in 1793. Tacy Kirk Penrose's wedding dress was passed down then donated by her grand-daughter Mrs Doris Penrose Spencer to the PHMC collection at Graeme Park.

Jarrett and Tacy purchased the Horsham farm of his sister Ann Penrose Iredell's husband Abraham, who had passed away in 1841, and became "one of the substantial farmers of Horsham township" 16 p906. Jarrett and Tacy had 5 children, their fourth child - William - was the father of Joseph Hallowell Penrose and the grandfather of Joseph Hallowell (Buck) Penrose Jr who has been a generous supporter of HPHA and was the source for many of the Penrose items in our collection.

William and Hannah's youngest child, Tacy, married Morris Davis of Horsham in 1847. Their daughter Jennie Davis wrote the 1914 paper 9 which is the source for much of what we know about this 19th century family.

We are aware of buildings that had been built on the farm that no longer exist but don't really know much about them. The painting shown below dates to the early 1800's and shows smaller buildings to the north of the Keith House which no longer exist, and various stories mention a 'slave jail' that was a mere pile of rocks in 1905. 26 84 Some of these probably date back to the Keith or Graeme era and others to the Penroses. Rev Hotchkin visited in 1885 and mentioned "the remains of one side of the jail" and "...outbuildings which formerly surrounded (Keith House)" 27, and Elizabeth Fergusson mentions a 'tenant' house' that her father was walking past when he fell and died - maybe the building to the right in the painting mentioned above. None of these remain. Many of the buildings that do exist today, though, were built by William and Hannah Penrose. 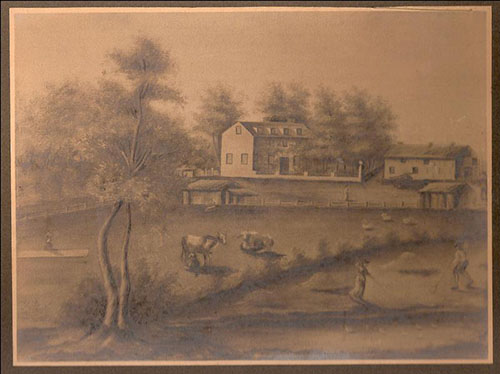 Two large barns were constructed by William and Hannah Penrose. One is the large barn now used as the Visitor's Center at Graeme Park and located right next to the Keith House. This was dated 1829 in a Masters Theseis by Nancy Wosstroff in 1958 134 p13. It was used as a working barn through the 20th century by the Strawbridges. The painting above shows the Keith House from the north with another building to its right which we believe is from the early 1800s. This barn does not seem to be in this painting.

The second is the barn built in 1839, just west of the 1810 Penrose Strawbridge House. Both of these are examples of Pennsylvania Bank Barns. (The farm also has ruins of an older and much smaller bank 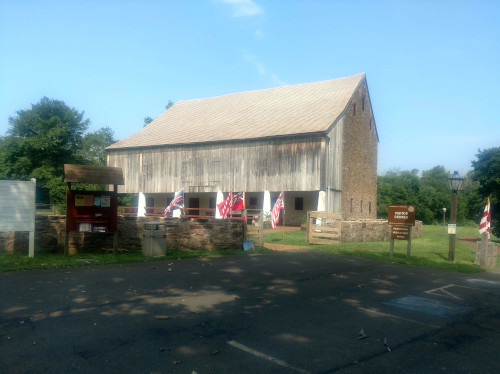 This second barn burned down in June 1949 but was not completely rebuilt. The original barn had been a much larger structure, after the fire it was rebuilt but to a smaller scale - removing the overhangs and access to the upper level via the bank. The bank and some columns on both sides still exist. William and Hannah also built a

A smaller barn was built in 18?? with small living spaces on the second level, and a carriage shed attached to the back of this barn. The carriage shed needs a great deal of restoration and may be older than the barn. The center bays of this barn probably were used at one time to house animals, there is a manure shoot in the back wall. We recently poured concrete floors in the sections of this barn that were previously just dirt. The photo below of the carriage shed also shows, in the lower right, part of two wooden outhouses located beside this shed

There are also ruins of a small coop or other type of animal shelter on the other side of the spring behind the carriage house. This was destroyed by Tropical Storm Allison in June, 2001 by flooding that also destroyed the plank bridge on the driveway out to County Line Road. There are also possible ruins of a small structure back in the woods across Governor's Road. Little is known about these or when they may have been built.

The Penroses also added onto the main house. This was originally a single room cabin which we date to c1721. The 3 story section that was built by or for William and Hannah was added to the south side of this cabin on top of what was probably an existing foundation in 1810. This house is what we now call the Penrose Strawbridge House