"
Restored and decorated c1721 room at the Penrose Strawbridge House

Samuel Carpenter was born in Horsham, Sussex, England. He was baptized in the Church of St. Mary'sm Horsham on 20 November 1649. He purchased 5,000 acres of land from William Penn probably on August 4, 1684. 4200 of this acres lie in what is now Horsham Township, PA which was established as a municipal entity by a vote of the people in 1717 and named after Carpenter's birthplace.

Carpenter was the youngest son of John Carpenter, the Sheriff of Horsham, who was murdered while on duty in Horsham on 9 August 1671, and his second wife Sarah (maiden name unknown). Samuel was 21 and, perhaps due to the violent death of his father, became interested in the teachings of George Fox whose followers were known as The Society of Friends or Quakers. There was a persecution of the Quakers in Horsham as early as 1655, but the records do not show the name of Carpenter as in the list of those prosecuted.(

While Quakers are today maybe best known for their pacifism, Fox also preached against the authority and excesses of established churches, and against the absolute rule of the monarchy which put him and his followers at odds with the Church of England and the Crown. The restoration of King Charles in 1660 had further tightened restrictions against all religious sects other than the Anglican Church, making the penalty for unauthorized worship imprisonment or deportation. 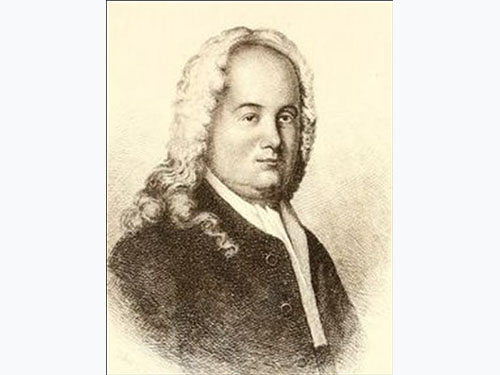 "Lately a statement was found, in the annals of the city (Philadelphia), to the effect that the township of Horsham, to the north of Philadelphia, was in the first place principally owned by Samuel Carpenter, and that when the settlers thereon went to Samuel Carpenter, and asked him what name he would like for the township, he (asked) to call it "Horsham." This story coming to light made some who were interested think that probably Samuel Carpenter had some connection with Horsham; and soon after, in September, 1900, while making some investigations in England, Mr. Thomas Allen Glenn discovered evidence, in the register of the Parish Church of St. Mary's at Horsham, to show that Samuel Carpenter, the first of his name in Philadelphia, was bom there, and probably lived there until after his father's death in 1671, when he left with his share of the patrimony to seek his fortunes in the Barbadoes. The register shows that Samuel Carpenter was bom November 4, 1649, and christened December 20, 1649, and that he was the son of John Carpenter by Sarah his wife."1141104

One of the more prominent Quakers was William Penn who,against the wishes of his father Admiral Sir William Penn, announced himself as a Quaker in 1666 at the age of 22. Penn was persecuted and jailed several times. He reconciled with the Admiral before the elder Penn's death and convinced the King to grant him what is now known as Pennsylvania (45,000 square miles) in payment of a £16,000 debt. In 1682 he he drew up a

The rest of Carpenter's family, including 2 half-brothers who later became successful in Phildelphia, remained faithful to the Church of England (Joshua was prominent as one of the founders of Christ Church, Philadelphia.1141104). In 1673, he joined a colony of Quakers on the island of Barbados, where he stayed about ten or eleven years. While there, he was fined in 1673 "one thousand one hundred and ten pounds of sugar" for not appearing or not sending men in arms to render military service. (This was recorded in "A Collection of the Sufferings of the People called Quakers for the Testimony of a Good Conscience," by Joseph Besse,published in 17531141104) The Quakers were against the use of slaves on the sugar plantations of Barbados and, in 1676, were also prohibited from preaching Christianity to the slaves. Samuel was once again fined in 1683 for not sending men with arms for military service. He and a Henry Wheately were fined "6,673" pounds of sugar. In consideration of leaving Barbados, the fine was suspended.1141104 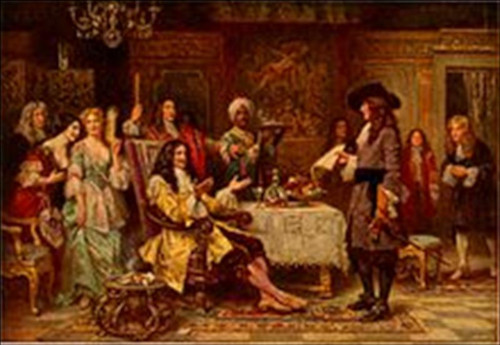 Carpenter, along with many other Quakers, emigrated to the new colony of Pennsylvania in 1683 to escape the persecution which had become common across the West Indies. Penn had been granted The Charter of Pennsylvania by Charles II to William on January' 5, 1681, so the Carpenters were very early members of the colony.

"Of the three ships which sailed from London for Philadelphia in 1681, the first, the "John and Sarah," arrived at her destination in the Delaware in a little more than two months,' the second, the "Factor," made the voyage in four months, and the third, the "Amity," was blown to the West Indies and did not arrive until the following spring."1141104

Samuel, Joshua, and Abraham Carpenter came to the Province of Pennsylvania with money. The brothers, especially Samuel and Joshua, were well-educated men, of excellent ability and judgment, and soon made their mark in the colony. 1141104 Samuel arrived in Philadelphia around July 10, 1683, quite wealthy from the sale of his holdings in Barbados and his inheritance. He made a number of investments in plantations, mines, mills, wharves and other property. On December 12, 1684, he married Hannah Hardiman, who had emigrated from "Haverford West Meeting in Wales the 2d of the 6th Month 1683". The original certificate written on parchment is in the possession of the Historical Society of Pennsylvania. It is the earliest marriage certificate in Pennsylvania now known to be in existence.1141104

Francis Daniel Pastorius, a German traveler, described being chased by pirates and having little to eat on his 2 month journey in 1683, landing a month after Carpenter:

"Philadelphia then consisted of three or four little cottages, all the residue being only woods, underwood and timber, in which Pastorius says he several times lost himself in travelling from the water-side to the house of Cornelius Bom, the baker, which stood near the comer of Third and Chestnut Streets. All kinds of temporary expedients had to be resorted to. Pastorius and his companions were obliged to occupy caves in the river bank until the lands assigned to them could be surveyed and houses built for their accommodations."1141104

Pastorius represented the Frankfort Land Company and acted as agent to conduct a colony of Dutch and German Mennonites and Quakers to the new colony. The Company purchased 25,000 acres and Pastorius laid out the town of Germantown. He became a life-long friend of Samuel Carpenter.1141104

He later purchased 5,000 acres including 4,200 acres in what is now Horsham Township, PA. Carpenter began to sell some of this land to other Quakers beginning in 1709.

Carpenter bought a lot extending from King Street (now Water Street) to Front Street and on to Second Street in 1683. This lot extends to Ton (now Tun) Alley. William Penn, in a letter written in 1683 describing some of the facts of chief interest in Philadelphia, says, "There is a fair key of about 300 feet square a little above Walnut Street built by Samuel Carpenter to which a ship of five hundred tons may lay her broad side." Gabriel Thomas, who came from England in the ship "John and Sarah" in 1681, in his account printed in 1698 says, "There is also a very convenient Wharf called Carpenter's Wharf which hath a fine necessary Crane belonging to it with suitable granaries and store houses."1141104 Carpenter's Wharf was expanded and used for over a century. 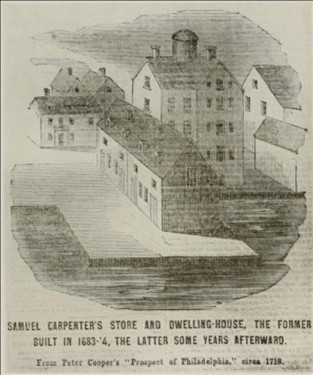 Samuel Carpenter later built the historic "Slate Roof House," at No.16 Second Street north of Walnut overlooking the Delaware River in 1687. It was built of brick in the Jacobean style, and was notable for its large size and slate roof. William Penn, from 1699-1701, was only the 1st of many notables to call the house home. James Logan, the secretary of the Proprietary after Penn returned to England stayed here from 1701-1704 and John Adams, John Hancock, and others from the Continental Congress also lived here at various times. The Slate Roof House was razed in 1867. "Welcome Park" was built on its site in 1982.

Carpenter and his brother Joshua, in 1686, also established the Tun Tavern (also called the Globe Tavern) in Philadelphia. "Tun" is old english for barrel or keg of beer. The Tun Tavern is famous for holding the first recruitment drive during the Revolutionary War for what would become the USMC, and for being the "birthplace of Masonic teachings in America". Tun Tavern burned down in 1781, near the end of the American Revolution. The site is now under Interstate 95 which runs along the waterfront in Philadelphia.

"Holmes Portraiture of Philadelphia," done in 1683-4 as a kind of city platform, shows the localities chosen for building at that time. It shows about twenty small cottages upon the river bank. ...Samuel Carpenter's lot extends from Front to Second Street and is the second lot above Walnut Street, No. 161141104 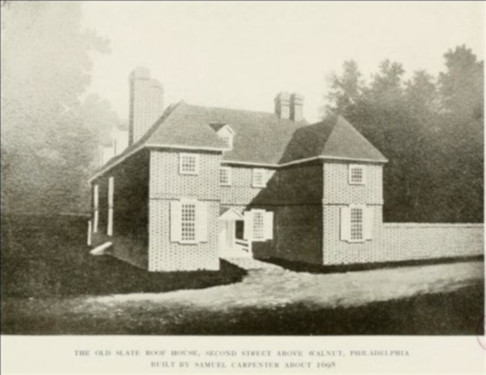 Samuel Carpenter served the new colony as Deputy Governor from 1694-1698. William Penn, as Proprietor, was the governor, but often left management of the colony to the deputy governor. He also served as Treasurer (1704–1710, 1711-1713), Member of the Assembly 1693–1694, 1696 and Member of the Assembly in Bucks County (1705). Carpenter also sat on what was probably the first Grand Jury in Pennsylvania which found Margaret Mattson and Yestro Henderickson guilty of having the common fame of a Witch but not Guilty in manner and form as she stands indicted1141104

Carpenter was likely the wealthiest and most powerful person in the colony of Pennsylvania behind William Penn. He did suffer some setbacks from losses due to pirates, the war of 1703, and depreciation of his property, forcing him to sell some of his property.

After his death, his estate was held liable for the funds that had been allocated in 1709 as a gift to Queen Anne to help finance an expedition against the French in Canada. The estate settled this issue with 1200 acres of land, much of what is now is Horsham, PA. This land was apparently sold to Andrew Hamilton who then conveyed it to Lt Governor Sir William Keith.

Samuel Carpenter died at the house of his son-in-law, William Fishbourn, at Sepviva plantation (380 acres are now part of "Fair Hill"), Philadelphia, on 10 April 1714 and is buried at at the Society of Friends (Quakers) Burial Ground at Fourth and Arch Streets in Philadelphia. 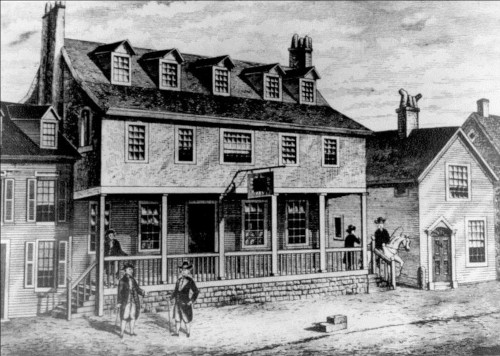 Samuel Carpenter sold, for a nominal sum of 5 shillings, 50 acres of his Horsham property to the new Horsham Friends' Meeting shortly before his death in 1714. The deed was not executed until 1718 and was signed by his widow Hannah Carpenter. (settlememt p73) 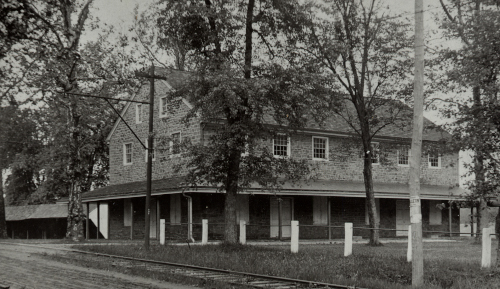 Samuel Carpenter's purchase of five thousand and eighty-eight acres from Penn's commissioners of property was finalized May 26, 1706, and although a portion extended into Bucks County, yet it may have comprised over one-third of the area of the present township. It had a front on the 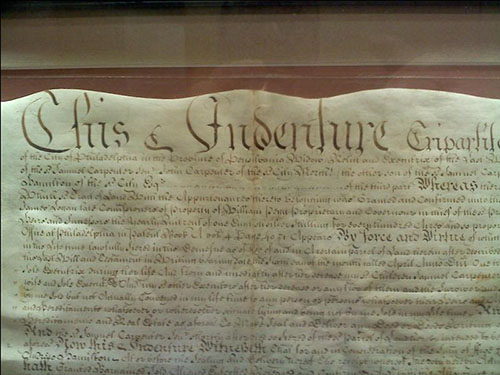 Carpenter, as treasurer of the colony, was held responsible for a gift that was voted on by the assembly to be given to Queen Anne c1711 in lieu of the colony sending troops to fight the Indians in what was know as Queen Anne's War. The war was ending, though, and the amount was never sent.

"When, in Queen Anne's time, the Assembly of the Quaker Province were induced to aid the expedition against Canada by voting two thousand pounds,professed to be not for the war, but "for the Queen's use,"it was provided that the Governor's receipt should be the voucher for the Treasurer. The expedition failing, nearly the whole amount remained a charge against Samuel Carpenter, then Treasurer, until his death. On November 12, 1717,

Keith added 300 additional acres to the 1200 he acquired from the Carpenter Estate to create his 1500 acre Fountain Low plantation, later known as Graeme Park.