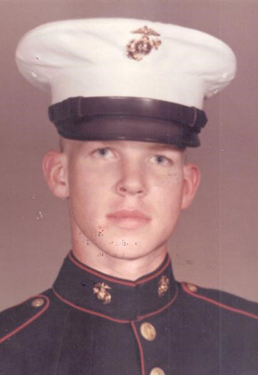 PFC William Henry Walls USMC was killed in Vietnam on January 24,1966 at the age of 19. A portion of Blair Mill Road has been renamed in honor of him

Bill was born on April 26, 1946 and killed in Vietnam on January 24, 1966 at the age of 19. He graduated from Hatboro-Horsham High School and grew up in the Horsham area. He had a great sense of humor and an infectious laugh. Bill was also known for his faith, kindness, and friendship.

Bill was also remembered for his heroic actions saving a young friend after a bad bicycle accident. Paul Schultz; Horsham, PA; former Seaman and LT US Navy; 1977-1988 was that young boy and remembered Bill's actions:

"BILL WALLS was a childhood friend of my brother, Greg Schultz and sister Bonnie Schultz Cegles. Bill was killed in the early years of the Vietnam War (1966). Bill was my hero for he saved my life. I had a very bad bicycle accident when I was a young child. I flew over my handlebars and my head bounced off the road. My face looked like hamburger meat. I was unconscious lying in the road. I did not come to until I was in the doctor's office. But, one thing I still hear even today (almost 50 years ago) is Bill's panting breath as he lifted me off the road and ran to my house where Greg, sister Bonnie, and Bill drove me to the doctor's office -- no 911 or paramedics in those days. Thank you for your service to your country, Bill, and for saving my life."110

Bill was only 19 when he died in Quang Nam serving his country with great honor. He is buried in Gettysburg National Cemetery in Gettysburg, PA. He is one of more than 58,000 people who gave their lives in this conflict memorialized on the Vietnam Veterans Memorial. His name may be found on Panel 4E,85)