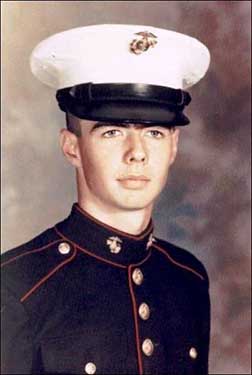 
Joseph J. Lannon Jr. was born on May 10, 1949, and grew up on Park Avenue in Hatboro Gardens. He graduated from St. John Bosco School, and from Hatboro-Horsham High School in 1967. He enlisted in the U.S. Marine Corps after graduation and was deployed to Vietnam in July 1968. Pfc. Lannon was killed in combat in Quang Nam, South Vietnam on October 1, 1968 at the age of 19.

Rep. Tom Murt (R-Montgomery/Philadelphia) introduced a bill in 2009 to name the bridge at Horsham and York road in Lannon’s honor. It passed the House and Senate in 2010 and was signed by Gov. Ed Rendell. The memorial was dedicated on May 10, 2011.

'Some of us are old enough to remember Joseph’s sacrifice and the other lives lost during the Vietnam War,” Murt said. “By dedicating this bridge in Joseph’s name, future generations will be reminded of the sacrifice made during that conflict. Joseph will represent all the young people who gave their lives during the war.” Rep Thomas Murt 1171111

"His father said Thursday young Lannon liked the Marine Corps, but had not announced any decision to make a career of it. Another son, Edward, 21, has just returned from a two-year stint in the Navy. The young Marine enlisted in November, 1967, several months after graduating from Hatboro-Horsham High School, where he was on the football and track teams. He went to Vietnam last July. His father works in an engineering laboratory at the Johnsville Naval Air Development Center."1173112

Joe is also one of the more than 58,000 people who lost their lives in this conflict and are listed on the Vietnam Veterans Memorial in Washington, DC. His name is recorded on Panel 42W,57.