The 1865 Penrose Indenture records the sale of portions of Graeme Park by 4 of the children of William and Hannah Penrose to their brother Abel Penrose.

Their mother, Hannah Jarrett Penrose became the owner of Graeme Park (which at that time included what we now call the Penrose Strawbridge Farm) when the title was transferred to her from the estate of her father William Jarrett in 1832. We believe Jarrett had the title as collateral for a loan to Hannah's husband Willam Penrose, and it became part of his estate that was then inherited by Hannah and her siblings. William and Hannah then paid off the loan but we are not sure why the title was transferred back only to her. She and William had owned Graeme Park since purchasing it from his parents in 1821.

Hannah died intestate in 1850 and "according to the laws of the state of Pennsylvania relating to Intestates Estates decended into and became vested in her children the said Jarrett Penrose, Ann Iredelle, Abel Penrose, Hannah P. Hicks, and Tacy S. Davis in equal parts parts as tenants in common." The estate remained in this state until the death of their father William in 1863.

This document was included as part of a generous donation by Mr. Joseph H. (Buck) Penrose Jr.

A transcription of this Indenture follows: 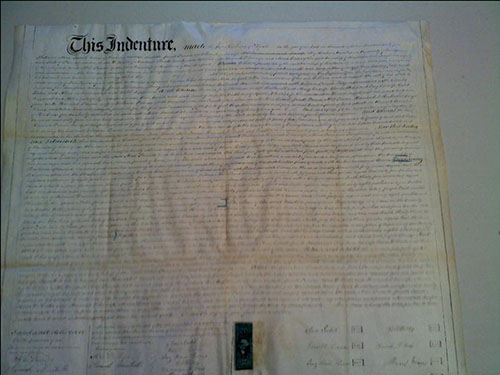 This transcription was done in January, 2013 by Annemarie Winters, an 11th grade student at Hatboro-Horsham High School

The document had several marks which do not appear to be original, including a set of blue brackets, 1 blue parentheses, and other marks as indicated. We have tried to keep the spelling as to the original. Hyphens have been kept as per the original.

The original has a small section struck through as indicated below. This is most likely original since it appears to be a mistake, listing Abel Penrose and Sarah his wife as sellers where they were actually the buyers.

We show in red sections where we are unsure of what is shown on the original.

We show ____ to indicate sections that were blank or unreadable on the original.

Seventeenth Day of April Anno Domini 1865 before me the subscriber one of the Justices of the peace in and for the county of Montgomery came the within named Ann Iredell, Jarrett Penrose and Tacy Ann his wife, Issac W. Hicks and Hannah P. his wife, Morris Davis and Tacy L {}. his wife, and severally acknowledged the within written

Recorded in the office for Recording Deeds &c. at Norristown in and for said County in Deed Book No. 137 page 505 {there are other marks here which are likely not original} Witness my hand and seal of said office April 29 th, 1865

For two messuages & two separate tracts of land in Horsham, one 181 acres the other 21 acres 90 perches

This Indenture, made the Seventeenth of April _____ eight hundred and sixty five Between Ann Iredell Widow of Abraham Iredell deceased, Jarrett Penrose and Tacy Ann his wife Able Penrose and Sarah his wife, all of Horsham township and the county of Montgomery in the state of Pennsylvania, Isaac W. Hicks of Newtown Bucks County state of aforesaid and Hannah P. his wife and Morris Davis of the said township of Horsham and Tacy S one part, and Abel Penrose of the other part; Whereas William Jarrett of the said township of Horsham by virtue of divers good conveyances and insurances in the law dually executed became in his lifetime lawfully seized of and in certain messuageslands and tenements and being so thereof seized died having first made his last will and testament in writing dated the ____ day of __ A.D. 1827 since his decease dually proved and filed in the registers office at Norristown in and for the said county of Montgomery in which he devised a special legacy to his daughter and subject to the maintenance of his son William and devised all the rest of his estate to his other five daughters namely Jane Thompson, Mary Intermarried with Israel Hallowell, Hannah intermarried with William Penrose, Tacy intermarried with Charles Stokes, and Allice intermarried with Caleb Lippencot and whereas the said Jane Thompson,Israel Hallowell and Mary his wife, Charles Stokes and Tacy his wife, Caleb Lippencot and Allice his wife by indenture under their hands and seals barring date the tenth day of April A.D. 1828 for the consideration therein mentioned did grant and con-firm unto Hannah Penrose wife of William Penrose (both deceased) who were Parents of the above named Ann Iredell, Jarrett Penrose, Abel Penrose, Hannah P. Hicks, Tacy S. Davis, and to her heirs then assigns forever in fee the four equal undivided fifth parts of all those two messuages and five several tracts or pieces of land situat in the said township of Horsham particularly described in said indenture recorded at Norristown in said county of Montgomery in Deed Book No. 48 page 76 &c. and containing all together two hundred and sixty four and a half acres as by the said record will appear; Being part of the estate devised by the said William Jarrett deceased as aforesaid; and Whereas the said Hannah Penrose being so lawfully seized as a fee of and in all the said two messuages and five several tracts or pieces of two hundred and sixty four acres of land died Intes-tate leaving her husband William Penrose who had sinced deceased, whereupon the same according to the laws of the state of Pennsylvania relating to Intestates Esates decended into and became vested in her children the said Jarrett Penrose, and Iredell, Abel Penrose, Hannah P. Hicks, and Tacy S. Davis in equal parts parts as tenants in common. Now, this inden-ture will Witnesseth that the said Ann Iredell, Jarrett Penrose and Tacy Ann his wife, Isaac W. Hicks and Hannah P. his wife, Morris Davis and Tacy his wife for and in consideration of the sum of twenty one thousand eight hundred and sixty seven Dollars and fifty cents lawful money to them in hand paid by the said Abel Penrose at and before the seal-ing and delivery here of the receipt whereof is hereby acknowledged Have and each of them hath granted Bargained sold released and confirmed and by these presents do grant Bargain release and confirm unto the said Abel Penrose and to his heirs and assigns All their for full equal undivided fifth parts of an in all that the following described to messuages and two separate tract pieces or parcels of land, part of the said above mentioned two hundred and sixty four and a half acres situated in the township of Horsham aforesaid, bounded and described according to a survey recently made thereof

The other of the said tracts or pieces of land Beginnning at a stone Easterly side of the Governor’s road the foresaid a corner of Samuel Dewees land thence by the same North thirty three and a half degrees East seventy five perches and four tenths to a stone in the line of land late of the said Joseph Paul deceased thence by said land South forty seven degrees East forty perches to a corner stone South thirty three degre-es East ninety three perches to a stone on the Easterly side of the aforesaid road thence along said Easterly side North forty three and three quarter degrees West thirteen perches and seven tenths to a corner stone and North eighteen degrees and one quarter West thirty four perches and seventy five hundredths to the place of beginning containing twenty one acres and ninety perches) Together with all and singular other the houses, outhouses, buildings, barns, stables, ways, woods, waters, watercourses, rights, liberties, privi-lages,

Sealed and delivered in the presence of us. {} The two names between the first and second lines were erased before signing.